I've booked this trip to the Grampians to sleep at the Royal Mail Hotel and dine at the restaurant about 3 months ago. It was hard arranging a night when both the hotel and restaurant were available.

We arrived at the hotel around 5pm and had some time to relax in our room before heading to the restaurant.

The restaurant is a large, bright open space with minimalistic decoration. Its key drawing card is the 'nature-based' cuisine focusing on organic and heirloom seasonal produce grown on site and harvested daily from the restaurant's own kitchen gardens, collected from the wild and sourced from local artisan producers.

The restaurant's wine list is equally impressive and the sommelier actually ran across the road to pick the bottle we chose from their wine 'shed' - a massive warehouse where they keep an extraordinary collection of wines from around the world. Quoting Royal Mail's own words "The award-winning Royal Mail cellar houses an extensive selection of Australian and international wines, including Australia's leading collection of Bordeaux and Burgundy".

From the very beginning of the meal, we could tell this place was serious about it's food. The humble bread and butter was transformed with a touch of smokiness in the butter - something that I've never seen before. The waiter explained they smoke the milk to make their own butter. 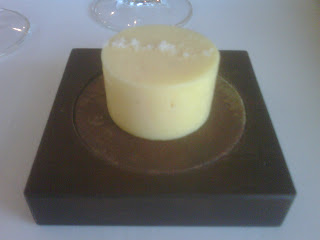 House made smoked butter
The first entree was a sea salad served with lemon and lychee. I have to say I didn't really like this dish. The 'sea' component had the texture of raw calamari and the green algae had no taste of their own. Disappointing. 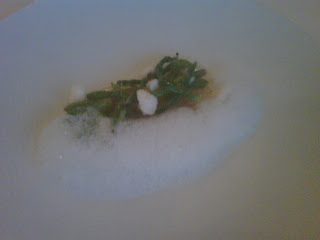 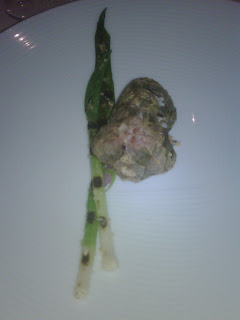 The next dish delivered a bit more of a punch. Egg yolk with toasted rye, legumes and yeast was an interesting combination. The 'bed' of crunchy rye and yeast was really tasty and the egg yolk bound the ingredients well. The only let down here for me were the proportions - not enough base for the size of the yolk, so the dish became a bit too wet and runny once the yolk mixed completely with the other ingredients. I think a quail yolk would have worked better. 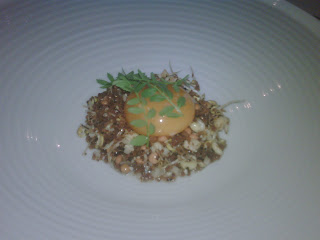 egg yolk, toasted rye, legumes, yeast
The hapuku in chicken broth was one of my favourite savory dishes. According to wikipedia, Hapuku is a highly rated eating fish found in Australia, NZ and Chile. I found it really tender and tasty - and was perfectly complemented by the slightly salty broth. Didn't want this course to end. 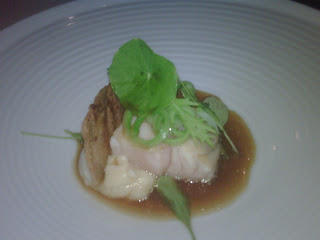 hapuku, brassicas, chicken broth and skin
Still in the seafood department, the next dish was a beautifully presented eel with kohlrabi (German turnip - thanks again wikipedia!) and potatoes. I'm slightly embarrassed to say I have no idea what the herbs decorating the dish were. All I can say is that it tasted great. Eel was nicely cooked and again, slightly salty, which I loved. 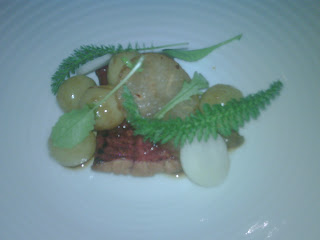 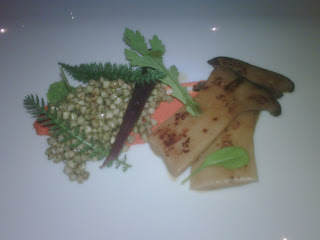 The last savoury dish was a bit of a disappointment. I thought the lamb was way too fatty and chewy. The other ingredients - eggplant, pine nut and chlorophyll - worked really well together and tasted great. But I still couldn't get over the lamb. I left half of it on my plate. 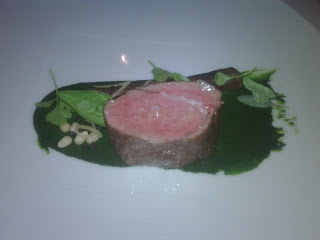 lamb, eggplant in white miso, pine nut, chlorophyll
Now to the sweets. We started with a 'transition' dessert that was only slightly sweet and quite different: rhubarb served with licorice and almonds. I normally hate licorice, but quite liked this dish. The flavours blended really well and opened my appetite to the sweeter desserts that followed. And the presentation was lovely. 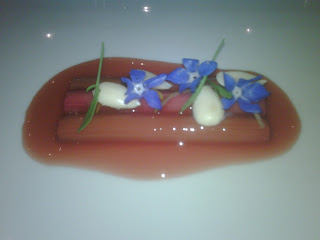 rhubarb, licorice, almond, citrus
What the second dessert lacked in presentation was made up by its taste. I simply loved the delicate coconut and cocoa ice covering the smooth and spicy banana. This was an amazingly complex, yet subtle dessert. Loved it. 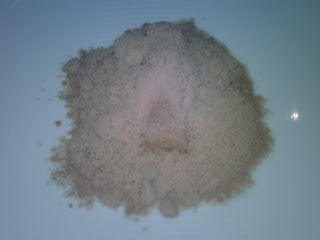 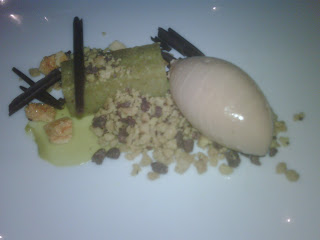 pistachio, hazelnut, honeycomb, chocolate
Last dessert was my favourite. The pistachio block had a great crunchy texture and the chocolate ice cream was decadently creamy.

Overall, I really enjoyed Royal Mail's sophistication and creativity. One big let down for me was the lack of explanation of the dishes being served. I thought service was very attentive, but the waiters only read the description of each dish and did not elaborate on explanations of the rare and exquisit ingredients used. I was much more impressed about our meal after I got home and did my own research. :)