Come here for: pretty authentic traditional Lebanese food
Don't come here: without a booking; we had to book almost 3 months in advance to get a table

Perception is such an interesting thing. What some cultures consider as part of their everyday lives others see as exotic, exquisite and rare.

Here in Melbourne in particular, some restaurants have explored the perception of exotic with perfection. Think of MoVida or Mamasita. Are they both great restaurants? Yes. But ask a Melbournian if they offer respectively the best Spanish tapas and Mexican food they ever tasted and the answer would likely also be 'yes'. Now ask a Spanish (or any other Mediterranean European) and a Mexican (or even a Californian) if those restaurants offer the very best of their cuisine and they would most likely say 'no'.

All depends on how familiar you are with certain foods. As ordinary as Vegemite and peanut butter is for Australians, I'm sure it would look like the most exotic food combination in Lebanon.

That's why I think there is such a hype (and looooong waiting list) about Abla's.

After waiting about 3 months for a table, we came here the other night to try their banquet.

Traditional babaganoush and hummus were the first things to come out, accompanied by some labne and flat bread. Babaganoush wasn't as smoky I would like, but hummus and labne were great - perfect texture and subtle taste. 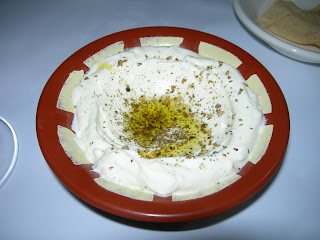 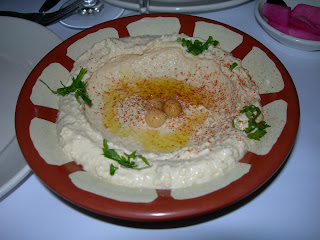 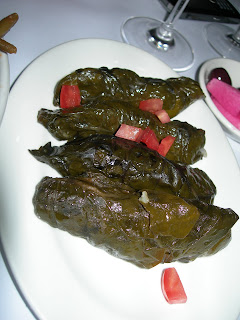 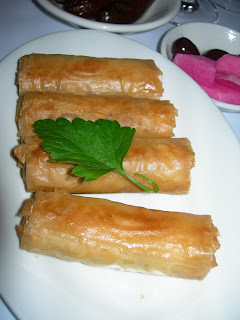 Both entrees tasted a bit bland and lacked the combination of spices I enjoy so much in Lebanese food: the tanginess of ripe tomatoes, the aroma of cumin and cinnamon, the earthiness of cardamon.

Next came the vegetarian dishes: falafel and broad beans. 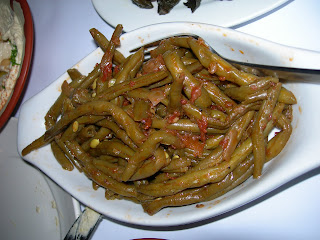 Broad beans served with tahini, garlic and lemon juice tasted ok, but the fact that it was served lukewarm put me off a bit. 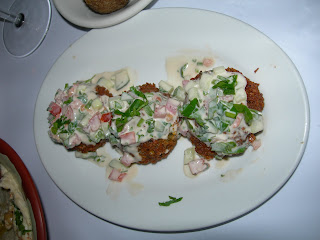 Falafel - chick pea, broad bean, parsley, coriander and spices served with tahini
The falafel was really crunchy and tasty. The yogurt and tahini dressing was a bit overpowering. It would have been better served on the side, as it made the falafel a bit soggy after a while.

The banquet continued with kibee and tabbouleh. Now here I get excited; it is so hard to find kibee in Melbourne, let alone good kibee. Kibee is a really simple dish of minced lamb and wheat that looks deceivingly easy to make. But to get a kibee that is crunchy yet doesn't fall to pieces when you eat it, crispy yet not overly oily, well cooked and moist - is bloody hard. 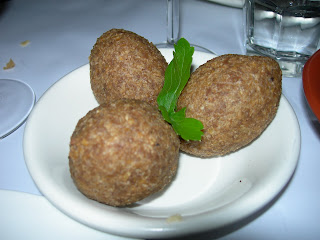 Kibee - minced lamb and cracked wheat stuffed with spiced meat and pine nuts
I have to say that Abla's make great kibee. Could have eaten several by myself and would come back here just for that! 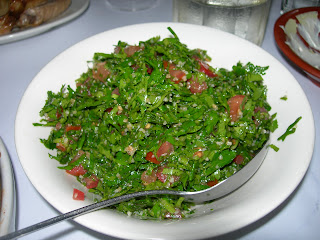 Finally came the traditional chicken and rice pilaf and lamb skewers. The chicken and rice is generally my favorite Lebanese dish. It's what I order 9 out of 10 times I visit a Lebanese restaurant, so I was excited about trying this dish. 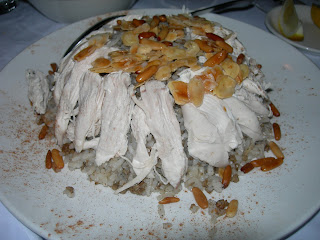 Flavoured rice pilaff with minced lamb, chicken and almonds
The chicken was nice and moist, but I was disappointed with the rice pilaf. It was overcooked and so bland! The taste just felt like a repetition of whatever else we had earlier that night. I was not enticed to go for more than two bites. 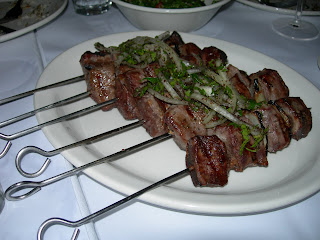 Lamb skewers
Lamb skewers got mixed reviews. Some of the people on our table said they were really well cooked, other said it was overcooked. I didn't try it.

Done with the savouries, we moved on to the sweets. Turkish delight and baklava were served with Lebanese coffee. 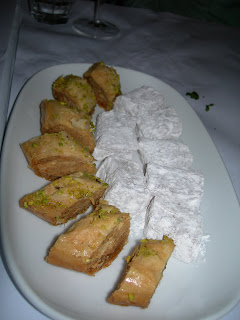 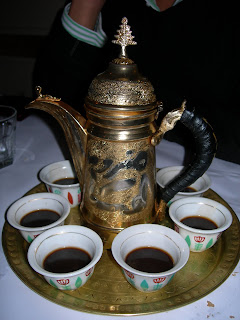 Lebanese coffee
Overall, the food was not bad - but not great either. It's certainly not worth all the hype and long waiting list. Apart from the kibee, I don't really see a reason for coming back.