Growing up in Brazil, you don't get a lot of winter chilli days when you just want to get home, crawl under a blanket and eat warm, fulfilling, comfort food.

But when you do, chicken stroganoff is definitely a classic. I know, it sounds like a Russian specialty (and it probably originally is) but it became really popular in Brazil. Maybe because it's easy, cheap and great for family meals.

Preparing a basic stroganoff is easy, but I'll give you a couple of tips to pump up the flavor a notch and guarantee the best texture for the dish. 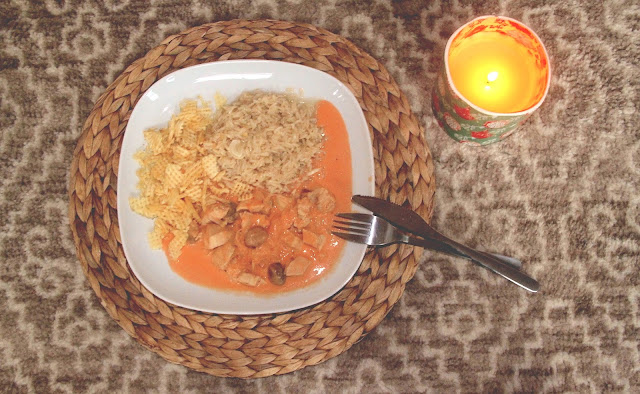 3 chicken breasts, chopped into 2cm dices
1 white onion, thinly chopped
1 cup sliced canned mushrooms (you can use fresh, but I prefer the texture of the canned ones for this dish)
2 full tablespoons flour - key for the creamy texture
750ml chicken broth
250ml heavy-cream (the fresh version, kept in the fridge)
1 tablespoon mustard
2 tablespoons tomato paste (or ketchup)
30ml Brandy - key for adding up flavor (the alcohol evaporates, so it's children friendly)
Olive oil, salt, pepper
Rice and Potato chips

Avoid stirring so that the chicken will be with a crispy texture. Add the Brandy to flambé the chicken. If you haven't flambéd before, I highly advice you to watch a video tutorial on how to safely do it. It's easy but you got to know the trick. Here's a good one:www.youtube.com/watch?v=G2vcHyuJlPM

Once the flame is out,  slowly add the flour. Then add the tomato paste, mustard, the mushrooms and finally the chicken broth.

Lower the temperature so that the mixture will slowly develop the flavor until it starts to boil. Taste and add salt and pepper as needed. Let it boil for about 5 minutes.
Remove the mixture from the heat, and, as soon as it stops boiling, add the heavy cream, stirring.

Serve it with Rice and Potato Chips (I prefer the thin, string fries, but they're not so easy to find).
Posted by Food lover at 13.8.15