As anyone who reads this blog regularly can attest, I'm a sucker for restaurant reviews. I avidly read the Epicure session of The Age each week and always like to try places that receive good reviews, especially if they also get good ratings from the various blogs I follow.

B.EAST was no exception. After seeing it in an article about the best burger joints in Melbourne - as well as reading positive reviews from fellow bloggers - hubby and I decided to give it a shot when we driving near East Brunswick. I don't know if we were just unlucky when we visited, but we got a very different impression of B.EAST.

When we visited - around 10pm on a Saturday night - a rock band was about to start playing and B.EAST was packed with a strange mixture of hardcore rockers, foodies with their massive cameras taking pictures of the food and some ordinary looking couples like ourselves looking completely out of place :) 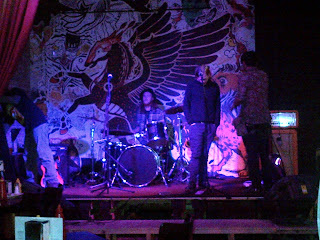 Live music - waaaay too hardcore for my liking

Seriously, am I getting old or is hard rock, screaming music just not the right background for a nice meal? The band was still setting up when we arrived and a DJ playing some cool lounge music which we loved, so hubby rushed to the bar to order our food and drinks. 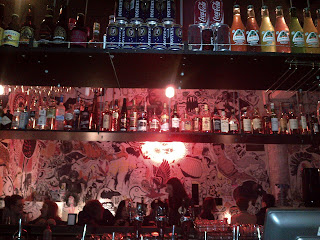 Order & pay at the counter at B.EAST

It took him about 20min to get his order through, as apparently the guy at the cashier was too busy serving drinks and talking to girls to look after the people ordering food. Hubby was a bit grumpy when he got back to the table... not a perfect start for the night.

The food actually arrived pretty quickly after that though. Hubby ordered the pulled pork burger, which looked awesome when it arrived. 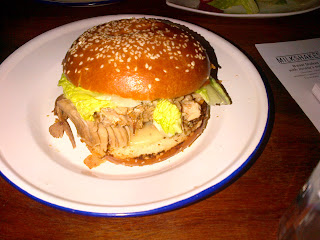 His sandwich was pretty tasty. It was more a pork sandwich than a burger though. Nice, big chunks of pork shoulder and crunchy crackling covered in sweet & sour apple sauce.

I ordered to side salad to 'pretend' to be a bit healthier :) I liked the look of it - fresh cos lettuce, radish and tomatoes served with a light dressing of white balsamic vinegar. Very simple dish that would have been great if the salad leaves were washed properly. I didn't feel the salad got enough TLC in the kitchen. :( 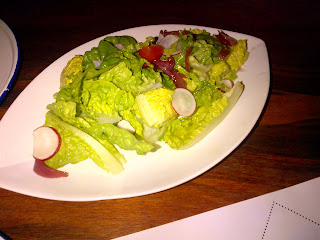 My burger was also pretty disappointing. It was tasty, but the patty was significantly smaller than the bun and was gone pretty quickly. I was left with 1/3 of a sandwich bun covered in tomato sauce and nothing else. 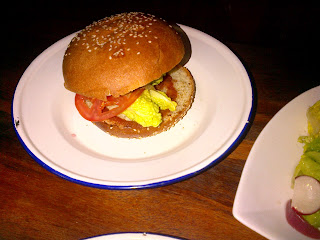 
So overall, I can't say I'm a fan of B.EAST. Service was a let down and so was my classic burger and salad. Hubby did like his sandwich and thought is was pretty good value for money as well. But was the pork sandwich worth the other let downs? Not in our opinion.

Beatbox Kitchen is always parked around that area and although they don't have tables, their burger is much better and doesn't require you to endure screaming hard rock music while you eat.