We had some friends from Sydney in town tonight and decided to try a new place with them. Neither my husband nor I had been to Matteo's before, but I've read good posts on other blogs about it and it has been awarded 2 hats in The Age Food Guide, so we thought it was worth a visit.

The service on arrival let it down though. We were greeted by a waiter who served us water and disappeared and then another waiter simply dropped the menus at the table without explaining the a la carte and set menu options. Not quite what you'd expect from a 2 hat restaurant.

We decided to go a la carte. I had my eyes on the main courses, so started with a salad (listed as one of the side dishes). It was a bit disappointing; I was expecting a lot more flavour with the wasabi mayonnaise and nashi pear citrus-y taste, but it was just pretty blend. I guess it would probably go well as a side dish, as the flavours wouldn't compete with the main course. 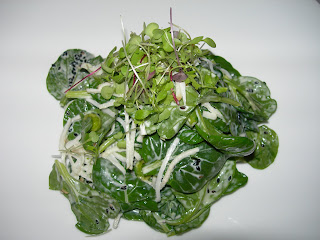 I got to try a bit of my friend's crab raviolo, which was really good. The crab tasted very fresh and the stir fry lettuce added an unexpected texture and flavour to the dish. The home made pasta also tasted very fresh, but was a little bit to thick, I thought. 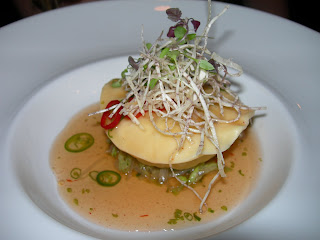 Last entree was an unusual, but surprisingly good combination of okra and beef bresaola. The cured meat was really tender and its saltiness went well with the crispy battered okras. I loved this combination of Italian and Japanese ingredients to create something totally out-of-the-box. 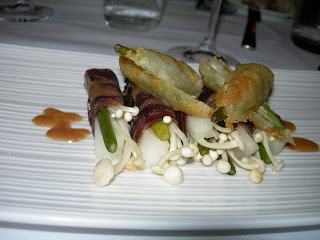 My main dish was the highlight of the dinner to me. I normally choose fish or seafood, but decided to 'explore' a bit this time and chose the duck. I have to say it was one of the best duck dishes I've ever had. Perfectly cooked and seasoned, served on a bed of tender choi sum and accompanied by a quirky looking 'okonomiyaki' pancake that was also - by far - the best 'okonomiyaki' I've ever tasted. The flavours just exploded in the mouth.

It was quite a large serve, but I was able to finish it all (with a little help from the hubby), it was so good. 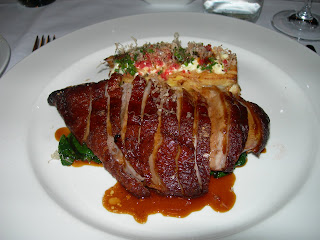 Hubby didn't like his suckling pig main as much. The bit I tried was quite good, but he said some of the crackle was soggy. I thought the satay-style dressing on the green bean salad was a bit too overpowering and oily. Just had a very small taste and then went straight back to my delicious main - duck was way better than the pork. 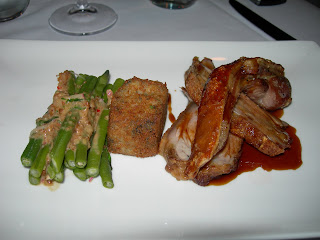 In sum, I'm a bit unsure whether I'd recommend this place or not. Yes, some of the dishes were delicious, but others were actually quite disappointing. Yes, the ambiance was great, but service let it down. And the price tag is not cheap. I guess yes - I would recommend a visit, if only to try their 5 spices duck.

Matteo's changes their menu with every season. Although it was not a place I would rush back to, I'd still return to try a new seasonal menu in a few months time.