A few weeks ago BF and I were invited to Cecconi's relaunch event however, due a sudden case of illness, we were unable to attend. We were extremely excited when we received an in lieu invitation through AMPR to come and see what Cecconi's has achieved. Last Monday BF and I finally had the pleasure of experiencing this Italian restaurant and cellar bar. 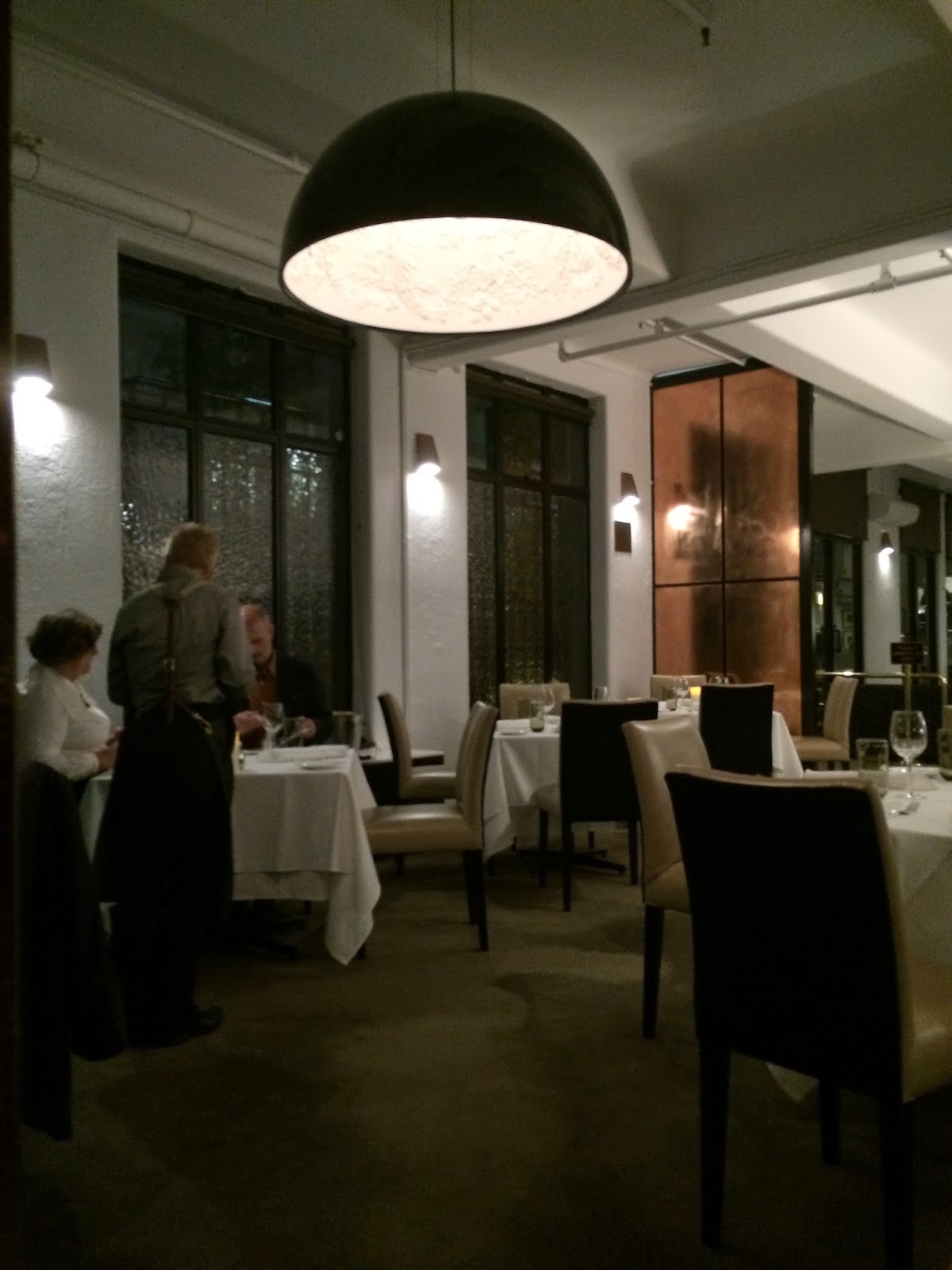 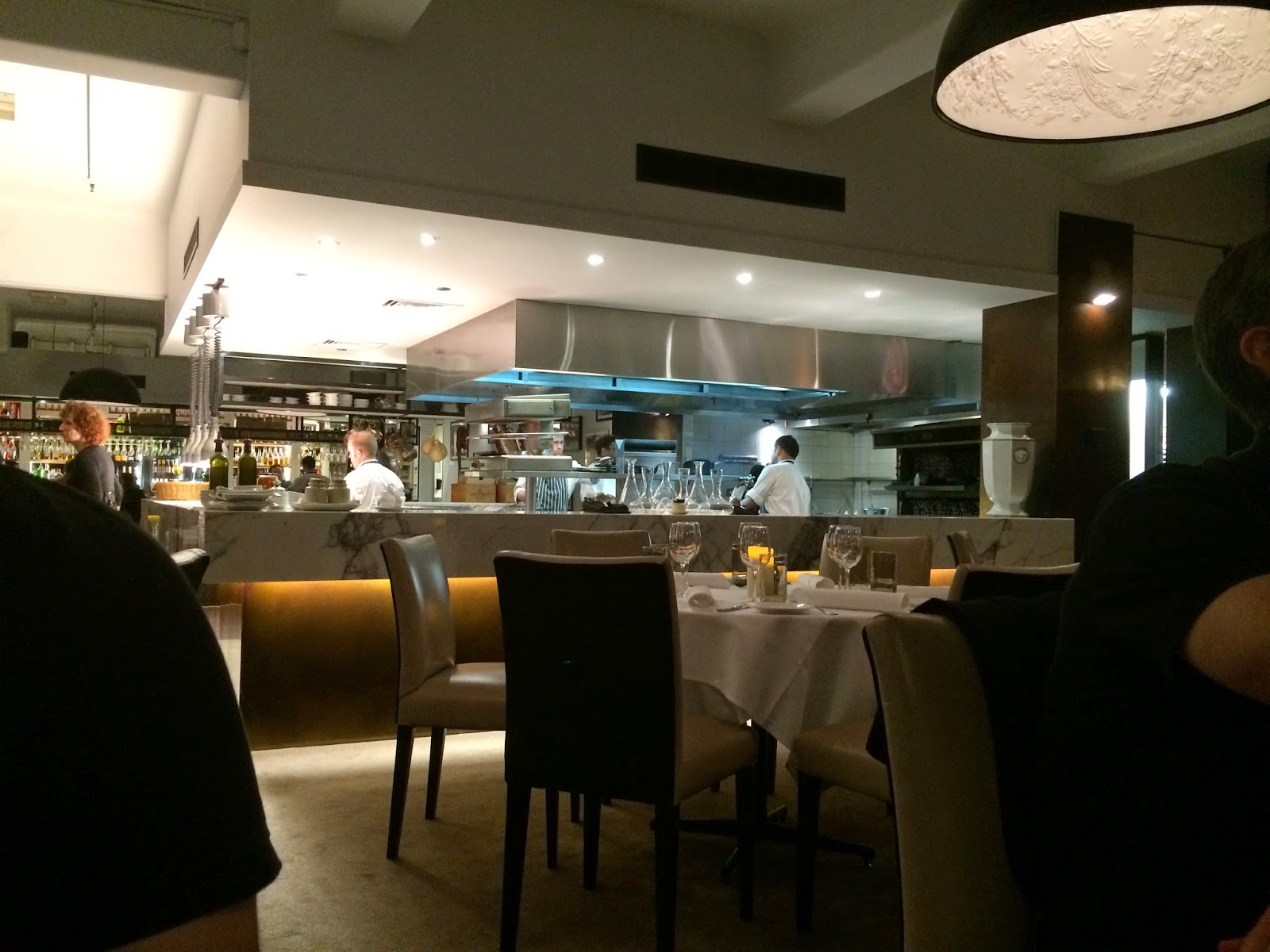 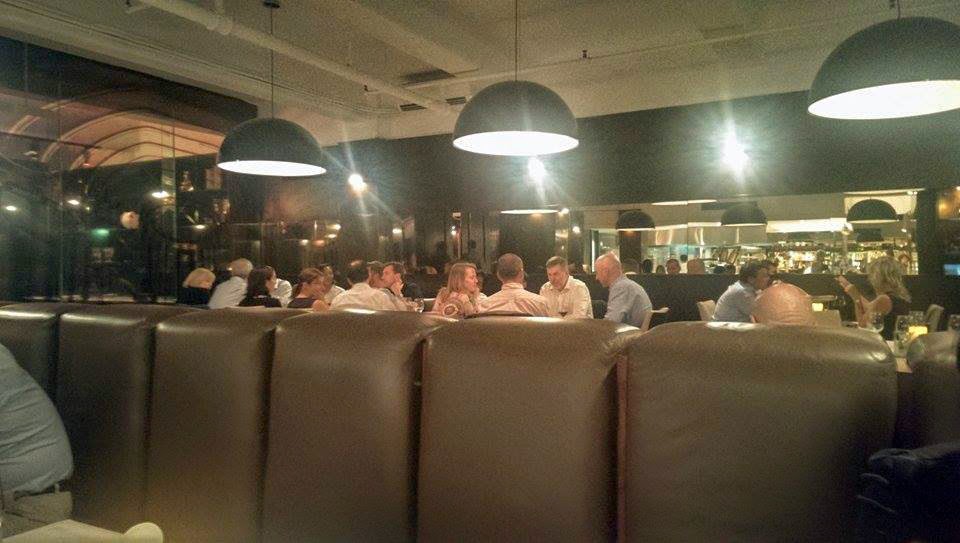 Over the New Year break the interior of Cecconi's was refreshed by interior designer Scott Mollard of Mollard Interiors. The restaurant was closed for two and a half weeks while new feature pendant and wall lights were installed, as well as other interior design details. I really like the Flos Skygarden pendant lights by Marcel Wanders (I just hope they are the real deal - as there are about 10 within the space). I love the copper panels and detailing, which helps give the interior a sophisticated feel with a hint of rustic charm.  Hats off to the Cecconi's team for creating a warm and inviting space.

When we ordered we told our waiter that we would be sharing each dish. They kindly offered to divide the portions and gave us our own individual serving. I found the staff throughout the night to be friendly, highly hospitable and attentive.

Bakeress says:
To start, we had the Calamari fritti in rice flour, salsa verde, lemon, garlic aioli. We chose this has we were told that this was one of their staple star dishes.  The rice flour coating made for a very light and delicate batter which really highlighted the calamari. The texture of the calamari was lovely too as it wasn't stringy. A simple (in other words, not over complicating the dish for the sake of being fancy), well executed dish. I also noticed that the food came out quickly.

We started with the calamari fritti, which was very nicely “crumbed” in rice flour, just enough to give a hint of a crunchy texture. This set the scene for the night. I was impressed with the tenderness of the calamari, and how well matched the slightly tangy garlic aioli was. Another aspect of this dish which I found particularly pleasing was the distribution of calamari piece sizes, I don’t know why, but it was nice to have three uniquely sized and shaped pieces.
Bakeress says:
Our next shared entree was the Pappardelle, beef and pork ragu, red wine, tomato. Again chosen as it was a recommended dish, our waiter explained that this is a classic which, apparently, never leaves the menu. Let's just say 'wow'!  I could tell this pasta recipe has been cooked many, many times, tried, tested & tweaked to the point where they've achieved an amazing dish.  The pasta was cooked to perfection - al dente with that bite and texture you want. The ragu meat pieces were tender and fell apart.  The tomato sauce was full of flavour. One of my highlight dishes of the night.

If you are after the definition of perfectly cooked pasta, please, please try the pappardelle at Cecconi’s! The ragu sauce didn’t quite live up to the pasta itself (seriously, one second more or less in the pot and I wouldn’t bother talking about this, the pasta was literally perfect). The pork and beef pieces were extremely tender but I found the tomato foundation to be slightly too acidic and, unfortunately, dominated my taste buds.


Bakeress says:
Our first main was the fish special. Our waiter sold it to us so well at the start of the night that we definitely couldn't pass it up. Chatham Island Blue Cod with handmade potato gnocchi and fennel garnish, what a beautiful dish. The fish was fresh, lightly seared on both sides and had a beautiful texture with a bit of bite. The gnocchi pieces were amazingly smooth and fluffy - a winning combination. This, in my eyes, was another of my favourite dishes at Cecconi's.

The slightly salted cod was probably my favourite dish on this visit to Cecconi’s. The fish itself was exquisitely fried and presented alongside what I would call ‘potato marshmallows’ – aka deliciously fluffy gnocchi. One gets the impression that the utmost care was taken while transporting this fish from Chatham Island to my plate, with the resulting freshness thoroughly appreciated.

Bakeress says:
We had a little Pinot to accompany our next shared main - Veal cotoletta 300g, apple, cabbage salad.
The crumb coating was a winner - very crunchy and light. I enjoyed the apple, cabbage and chive coleslaw as it really needed something fresh to balance the large piece of veal.

The veal cotoletta (a schnitzel with the bone still attached) was ok... I struggle to describe it any other way – there was nothing wrong per se, but nothing particularly noteworthy either. The heavy salting probably assisted in providing a defining taste, but the apple and cabbage salad, in my opinion, was too dry to work as a side for this salty fried cutlet.

Bakeress says:
We were surprised with a side of Cecconi's Hand cut chips with garlic aioli. Our waiter had organised these without our knowledge.  First I noticed the great presentation of a lattice of thick hand cut chips... Then... OMG, tasted them!  Thin, crispy exterior with smooth, soft potato on the inside. It was amazing to have that contrast in the one mouthful.  Delightful, I'd definitely order these again.

Massive, “Probably a small potato in each chip” was my initial reaction – and that didn’t change after eating one. Beyond the size, these twice cooked chips were very good, just missing out on making it onto my personal list of top chips.

Bakeress says:
Can I go past a Tiramisu at an amazing Italian restaurant like Cecconi's?  ...and the answer is - 'no'.  Adding this to my tiramisu mission list, I was pleasantly surprised.  This tiramisu was like a good old traditional tiramisu, until you hit the little crispy pieces among the beautiful smoothness of the mascarpone cheese and kahlua soaked cake. The edge which made this tiramisu for me was the wafer-thin 'choc crack' pieces, which is apparently created using three different types of sugar reduced to a caramel and then hardened to a toffee. A delicious ending to the night.

Regular readers of MDB will know of Bakeress’ love for Tiramisu, so rather than tread on any shoes, please see above... (Although, personally, I did really Cecconi’s efforts. The crispy chocolate pieces were great and unique, while the presentation was really cool too!)

Bakeress says:
Because of BF's nut allergies, we received an altered version of Cecconi's Caramel pannacotta, wild fig cake, macadamia ice cream dessert and received chocolate brownie and toasted milk ice cream instead. As a massive fig fan, the fresh figs were amazing. Overall though, this wasn't my favourite combination, however we did have the flavour combination customised for a nut allergy.

The pannacotta was originally paired with a macadamia and fig cake and a scoop of macadamia ice cream, however our hosts at Cecconi’s were generous enough to switch in a chocolate brownie and some delicious toasted milk ice cream to accommodate my nut sensitivities. As a side note; this accommodating attitude is a reflection of the service you will receive from Cecconi’s great staff! In the end, each individual element was great, but when all put together I fear that my nut forced Frankenstein dessert probably wasn’t as good as the one originally on the menu. For everyone out there with a more sensible immune system than mine, please order the pannacotta and let me know how it tastes!

Overall, Cecconi's is a solid choice for a nice upper-midrange night out in the CBD. Somewhere that does a quality modern interpretation of traditional Italian cuisine - thankfully whilst avoiding getting bogged down with a menu full of pizzas and pastas that you could get from a million other places in Melbourne. I’m not sure if Cecconi’s has an ‘ace in the hole’ as such, but it is also very, very hard to fault anything that we experienced. The service, ambient noise and open kitchen all evoke a feeling of quality, which is absolutely confirmed when your food arrives. Well suited for business dinners, special family gatherings or something more romantic, Cecconi’s won’t disappoint.

Thanks to Cecconi’s and Abbey from AMPR for hosting and allowing us to experience this Flinders Lane gem.