To celebrate dad's birthday, we went to Old Kingdom in Surrey Hills.  I was looking forward to it as I love Peking duck.  It was my first visit, however mum and dad had been there before.  I was also interested to see how it compared to Simon's.


We ordered the 3 Course Peking Duck meal with one duck.

The first dish was the Crispy Peking Duck - the reason why we were there.  One of their chefs cut the whole duck at our table, showing off their experienced and speedy knife skills.  It was served with homemade pancakes, cucumber, spring onion and a special homemade hoisin-style sauce.  The duck's skin was the hero, very crispy and thin - perfectly how you would what it.  The pancakes were also thin, however mum and dad did mention that they didn't look like the traditional Peking duck wraps which they had when growing up in Hong Kong.  They said that Old Kingdom's pancakes looked more like an egg mixture based crêpe rather than a white floured wrap, which they were used to.  Overall, though, it was delicious. 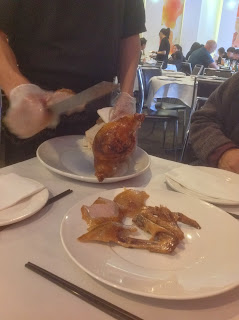 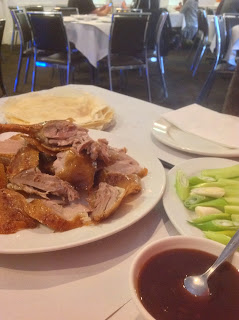 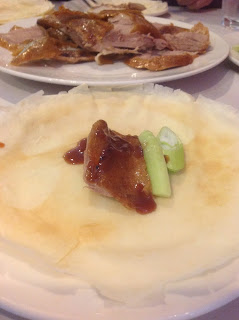 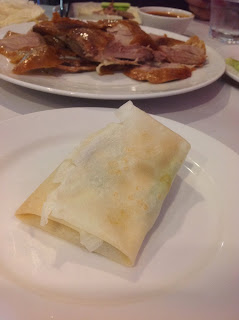 The Salted Vegetable and Duck Soup followed.  It was a clear broth style soup with tofu as well.  A traditional Chinese style 'filler' dish as part of the banquet.

We opted for the additional noodles for the stir-fry.  I'm grad we decided on the noodles as they were crispy and gave more substance to the dish.

At the end of our meal, my parents asked if they had any spare duck carcases as they wanted to make congee.  They were generous enough to give them a full bag at no charge.

Old Kingdom is a great place for Peking duck.  The banquet was well priced and we left very full and satisfied.  They definitely know how to cook delicious duck.