We found the Yorkshire Hotel when searching on Urbanspoon for the highest rated sports bars around Richmond.


The Yorkshire is very much in the style of The Grand in Burnley St.  It's a reasonably traditional pub with a gastronomically slanted menu that focuses on reinterpretation of classic pub favourites.  Unlike The Grand, however, there were few people there on a Saturday night, which we found puzzling at first.

We weren't able to sit in the dining room as we needed a view of the TV, but it's fair to say that the holes in the roof, makeshift lighting and general lack of upkeep did not bode well.

We went to the bar to order, but were confronted by the diner before us 'throwing his toys' at the publican, who apparently was so rude that he had inspired the customer to say 'stuff you, I'm not going to order any food then'.  I enquired what had happened, to which the staff were extremely sarcastic.

This lack of professionalism was a theme through the night.  My wife is heavily pregnant so everywhere we go, we ask the wait staff if there is anything we need to be concerned about in the dishes we are ordering.  100% of the the time (99% now) we get a very understanding response, followed by an informed rendition of whether the ordered dishes were suitable or not.  Where unsure, wait staff immediately refer to the kitchen.

So I ordered a lamb stew and the missus was keen on the chicken pot au feu.  When I asked the waiter (who was part of the prior incident) if the chicken was safe for pregnancy, he responded with a look of disdain, 'How would I know, I'm not an expert on pregnant women'.  Trying to be helpful, I suggested he might want to ask the kitchen, 'Mate, I doubt they are experts on it either'.  Upon me insisting, he trudged off and came back with no concerns from the kitchen.  Not good.

Which is a shame, because the menu is very well constructed and tries to position the establishment as a gastropub.  The inconsistency with this aspiration, the tired premises, and genuinely bewilderingly rude staff is a puzzling combination.  Service is a key part of any dining experience, I don't think they understand this.


Despite this, the lamb stew was pretty good, particularly for the price.  A nice stock with tender lamb pieces was complemented by reasonable vegetables.  It was very hearty and I couldn't find too much to complain about. 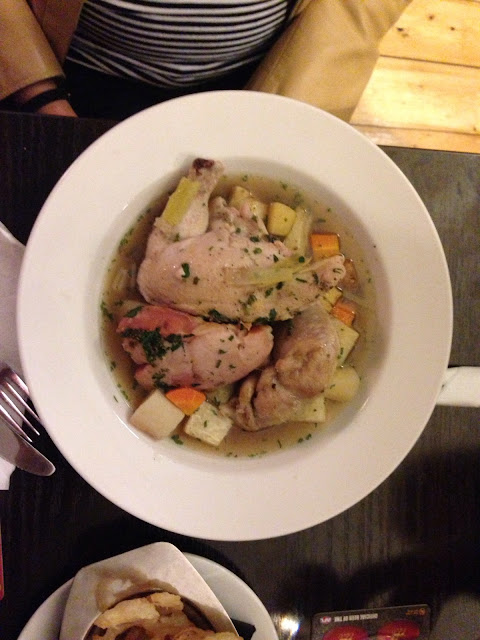 So after the dramas ordering the chicken, the same waiter brought it over with the description 'One pregnant safe chicken'.  The only problem with this was that once cut open, it was red and bloody on the inside.  Now I don't want to rant, but expectant parents are paranoid at the best of times, but serving slightly raw chicken when you know it's for a pregnant lady is seriously negligent and could have serious consequences.  Raw chicken and listeria go hand in hand, imagine the lawsuits....

So we sent it back and they cooked it a bit more.  On it's return, we were told by the same waiter that it's usually a little pink.  Not the point buddy, particularly given the 'One pregnant safe chicken' declaration.

I don't often slam places, particularly when my dish was pleasant, but I would avoid this place at all costs.  It pretends to be a gastropub, but it doesn't execute well at all in terms of front of house to kitchen communication and general desire to provide pleasant service.  When I walked in I wondered why it was virtually empty on a Saturday night, now I know.

Note the urbanspoon rating below.  We are huge fans of urbanspoon but here is proof again that high urbanspoon ratings do not always correlate with reality.  There have been a number of articles about how social media can be manipulated as a marketing tool recently, I don't know much about this but you do wonder sometimes.