Moon Under Water is the dining room at Builders Arm Hotel; a relatively new venture by Andrew McConnell and Josh Murphy in Fitzroy.

The dining room is set menu only, offering 4 courses for $75 the night we visited. The set menu changes weekly and they can accommodate dietary requirements as needed. There is also a vegetarian option for those so inclined.

We were greeted with a very crisp and tasty parmesan biscuit before our entrees arrived.

The first entree was yellow fin tuna on crouton topped with creamy almond sauce. The croutons were paper thin and very crisp; nicely executed.  Yarra Valley heirloom tomatoes were added to the almond cream, which made an interesting combination. Good, light dish overall. 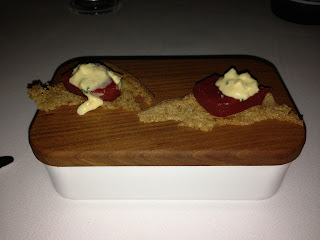 I loved the presentation - we finished our entrees to realise that bread and butter had been tucked away in the little tin box beneath. 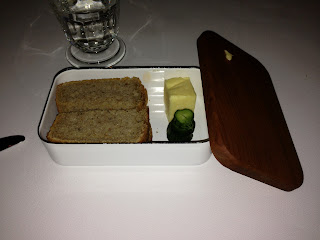 The second entree had our table divided. Hubby thought the quail legs were perfectly cooked and tender. I thought they were undercooked and lukewarm. I actually sent mine back for a few more minutes under the grill. We both loved the sweet marinade and leeks served with our quail. The sides were the star of this dish for me and I wished there was more of it. 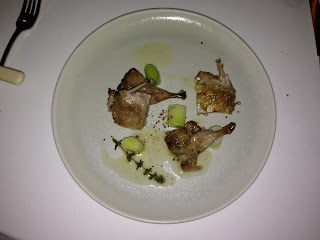 Our main was slow cooked Hapuka served with clams, parsley and Asian greens. It was a much more substantial serve than the entrees and was served with a side salad of iceberg lettuce and potatoes.


Although the fish was perfectly cooked, I thought it was lacking in flavour. I found my dish quite bland apart from the aromatic garlic confit added to it. The salad on the other hand tasted fantastic with a very pronounced zesty dressing. Fish and salad combined worked well for me, but the fish by itself was a let down.


Unfortunately I didn't get a picture of the dessert, which consisted of blackberries, liquorice, grapefruit and white chocolate. Tasted nice, but not remarkable.

Coffee was served with small parcels of salted caramel filled chocolate. Surprisingly, these ended up being the highlight of the meal for me, even though I'm not a huge fan of caramel. The bitter dark chocolate was a perfect match for the sweet, gooey caramel.

These were seriously rich and tasty parcels that still make my mouth water as I write this post.

It goes without saying that presentation, service and ambiance were all spot on. We had a very pleasant evening - and meal, but I was not as 'wowed' by the end of it as I expected to be. And the fact that you can only have the set menu which changes regularly means it's a bit of a lucky draw. Hubby for example is not a huge fan of fish, so 2 of the 4 courses were dishes he normally would never choose.

In all honesty, I would go back to the adjacent gastro pub Builders Arm any day over the dining room.