‘D Launch’ was recently held by David’s in Prahran to celebrate the rebranding of the business after 15 years at the top of Chinese cuisine. Despite holding a cumulative 10 chefs hats, David Zhou felt the need for a refresh to bring new ideas and concepts to the restaurant.


Many Melbourne diners would have experienced David’s old menu, which at one stage put it in the Top 50 Chinese restaurants outside China. The new David’s however, brings a fresh take on this previously successful restaurant with interior design by Hecker Guthrie, staff dressed by TL Wood and most importantly, a new menu. 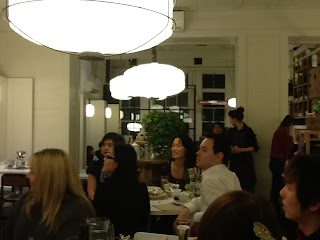 The menu is inspired by cuisine from Zhouzhuang, a rural town in Shanghai.  It emphasizes honest, homely food, ‘usually reserved for shanghai locals’.  The new menu makes big use of soy, sugar, ginger, chillies and garlic.

The menu for the night was extensive and provided a great opportunity for sampling the new direction that David has taken.  Given the wide variety of what we tasted, I won’t write a phonebook on each dish.  As a general summary, David’s philosophy of ‘country Shanghai’ is expressed through an extensive menu of generally uncomplicated dishes, but executed to a
very high standard.  Clearly I have my favourites, but to be honest , this is driven more by personal taste (or aversion given I don’t eat shellfish) rather than the quality or execution of
the dishes.  But for what it’s worth, the ‘spiced oolong tea quail eggs with bean curd and wolf berries’ were amazing, the DIY shredded duck was a very interesting take on an old favourite, and the Almond pudding had an incredibly light texture, but strong flavor.


My friend Jenica, who also attended had the following to say about the food:


We had a number of shared starters, it was a bit like eating home with
friends and family! The bite sized prawns were crunchy and salty, i could have
finished the whole bowl myself, they were fun to eat and bite sized.


The mains were again shared and well portioned. Many of the mains were
traditional shanghainese home style dishes. My favourite was the peasant’s crab,
it was silky and soft mixed with well cooked seafood and was the perfect
accompaniment with a hot bowl of white rice. The ‘Country Comfort’ (stick pork
belly and chat potatoes) was wonderful. The pork was tender and fatty and the
potatoes were waxy and well cooked. I am sure this dish can't be good for the
waistline but it tasted so good that I had to go back for seconds!


We had 2 desserts, the first was a traditional Chinese almond pudding
that was served warm. I was not sure about the almond taste, but the pudding
was warm and gooey, and had crunchy black sesame sprinkled on top. The second
dessert was a Osmanthus and Red Bean Black Sticky Rice Pudding.   I am not
sure if this dessert will suit all western tastes, but the rice provide some
texture and crunch against the soft red beans. I enjoyed both deserts and it
was a lively way to finish the night.

Finally, I would like to specially thank Grace Lee, the social media manager who arranged
the event  and was the perfect hostess.