Crown Complex, Southbank - ph: 8648 1900
www.rockpool.com.au
This was the 2nd time I came to Rockpool at Crown. I have to say I didn't love my first experience - the food was good, but not amazing. However, this time's experience was simply perfect! I was impressed.

Starting with the service. We had a reservation for 7pm, but were running about 30 min late because of traffic (driving Friday night through the city, what were we thinking?). We had already bought tickets to the movies later on, so were pressed for time for dinner. Rockpool called us to let us know that they couldn't hold our table at the restaurant, but would be able accommodate us at the bar. When we finally arrived, the waitress was really nice to get our order organised quickly and we were served in about 20min.

I started with a warm salad of grilled vegetables and goat's curd. Wood fire grilled vegetables and goat's cheese salad ($9.50)
I have to take some time here and digress to my most memorable meal - a similar grilled vegetable salad I had in Toledo, Spain. Well. this one came close to it.
What I love most about this dish was it's elegant simplicity; just vegetables, good crunchy bread, really good quality silky cheese. Delicious!
Hubby started with his favourite - mac & cheese. Mind you, not just ANY mac & cheese. Neil Perry's recipe is something special. We've tried this recipe a few times at home - basically, bacon + lots and lots of cheese + a decent amount of cream. The end result is something that might give you a heart attack - but you would die happy :) 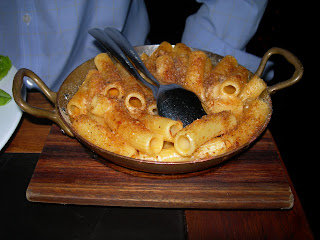 Mac and cheese ($15)
The restaurant's version has a different texture from what we make a home. The sauce was a bit runnier, but smoother. Great dish.
For main, I chose a beef tagine with couscous. I was curious to try this dish as is sounded like something a bit different from the rest of the menu. 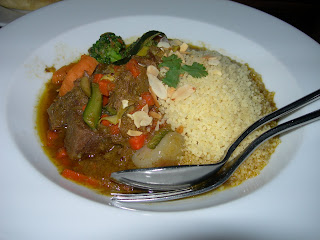 Beef tagine with almonds, green olives and couscous ($22)
And what a pleasant surprise it was! I have to say I thought it lacked a bit of salt (which I quickly added; beautiful salt flakes where on the table). But after adjusting this seasoning, the flavour was amazing. The meat was perfectly cooked and did not even require a knife to cut through it. It had just the right amount of sweet middle eastern flavours of honey and cinnamon. Really, really good.
Last, but certainly not least - THE BURGER. I have said before that The Barkers made potentially one of the best burgers in town. If there is competition for that, this is it. According to hubby, Rockpool's burger is 'more refined'. This is a restaurant meal, whereas The Barker's is its pub cousin (whatever that's supposed to mean... men). 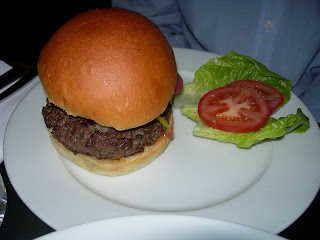 Waygu beef burger with gruyere cheese and pickles ($22)
I agree that the presentation was impeccable. The burger was great, but I still prefer a more greasy, pub-y version. 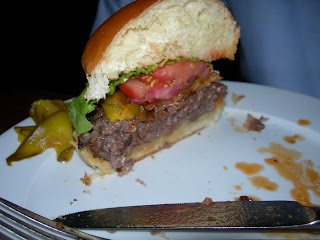 Half way through...
In sum, we had a lovely meal, great service and overall a great night. Would (will) come back again and again.