Ground Level, 180 St Kilda Rd, Melbourne - ph: 8620 2434
I have read so many reviews of Persimmon and seen so many fellow food bloggers rave about this restaurant that I HAD to give it a go.

And what better occasion to do so than during Melbourne's Food & Wine Festival? During the Festival, a number of top restaurants is offering lunch specials at $35 for 2 courses + a glass of wine.
As a part of the National Gallery of Victoria, Persimmon follows the gallery's opening hours and is only open for lunch. We took a look at their a la carte menu and it also looks fantastic. 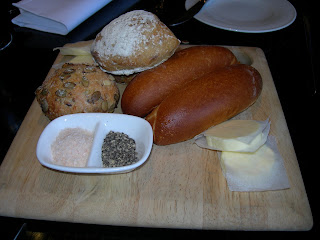 Complimentary selection of breads: multi-grain, onion and white
For the entrée, I chose the watercress soup with goats gnocchi. The plate came with several pieces of small crafted gnocchi and the waiter poured the lukewarm watercress soup on top of it in front of us. The soup was a thick, dark green cream of watercress. Unusual and not quite of I expected, but very, very good. The gnocchi was light and soft. I would have liked for the goats curd to stand out a bit more; I could taste only a hint of it in my dish. The freshly grounded nutmeg added some awesome flavor to it. 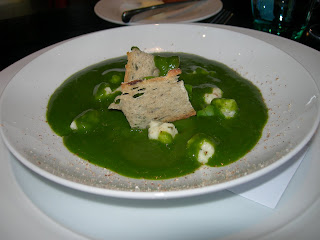 Watercress soup, goats curd gnocchi, grated nutmeg
The other entrée option was a poached carpaccio; also pretty unusual I thought. The poaching was just enough to sear the meat and it was sliced much thicker than your traditional carpaccio. The quail eggs were crumbed, which made them a bit too heavy. My friends thought it was ok, but didn't really love it. (no-one dared touching the sweetbreads... it's such a weird name for what it actually is). 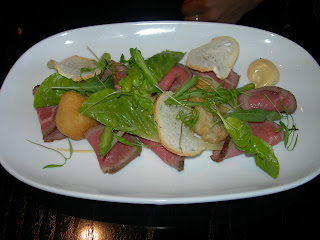 Olive oil poached veal carpaccio, quail's eggs, sweetbread and rocket
For the main course, I chose the market fish of the day, blue eye. The fish was perfectly cooked, juicy and very tasty - great. Carrot puree was also very good, with just the right amount of sweetness coming though and a creamy, silky texture. The only problem is that there wasn't enough of it. I finished the puree before getting halfway through the fish. The other elements of the dish were disappointing. The pickled vegetables were too crunchy and quite bitter (rather than sour, as I was expecting).
I think foams are a bit more of a visual addition to a dish; something that looks impressive but doesn't really add much flavor. I could not taste the ginger at all. 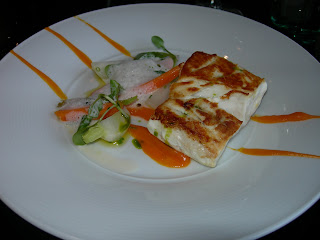 Blueeye fillet, carrot puree, pickled baby vegetables, watercress, pickled ginger foam
Hubby chose the lamb. The dish tasted really good, specially the jus gras (I'm guessing the sauce was made using the lamb's own juices?). But again, not enough vegetables or sauce to go with it. We both wished we had seen more in our plates. 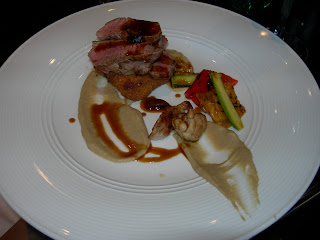 Lamb loin and shoulder, vegetables provencale, jus gras
Dessert was the standout of our meal. Although it does not even resemble a traditional pannacotta, we were very pleasantly surprised with this delicious combination of flavors and textures. The vanilla and apple cloud was perfectly light and tasted amazing with the crunchiness of the hazelnut crumble. The green apple sorbet awoke the senses with a freezing tongue sensation and its sourness balanced the could's sweetness perfectly. The unbelievably thin apple slice was just too pretty to eat.
I would certainly come to Persimmon again if only for this dessert. 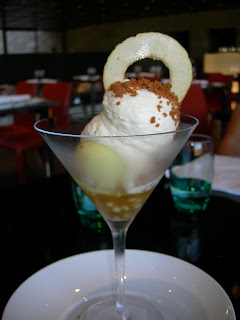 Apple pannacotta, hazelnut crumble, green apple sorbet, vanilla and apple cloud
My final verdict: I did enjoyed this restaurant although I was expecting more based on all the hype I've heard about it. Entree and dessert were great, main was ok (I suspect it had something to do with the Festival menu?). I would come back to try their a la carte menu.