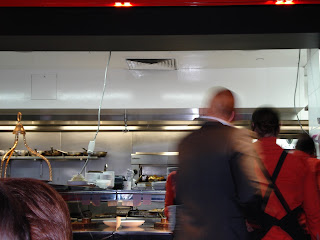 Ahh, The Press Club. Ever since chef George Calombaris has been on Master Chef, this modern Greek restaurant is receiving so much more attention from the media - you hear about it everywhere.

In this year's Good Food Guide, The Press Club has been 'upgraded' to two hats, so I thought I'd give it a try (even though I'm not such a huge fan of Greek food).

I've been to The Press Club bar a couple of times for lunch - where they serve light meals for a fraction of the price of the restaurant - and liked it a lot. 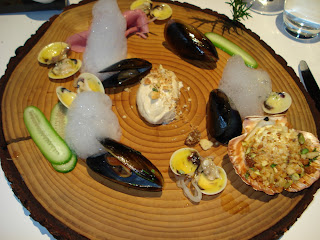 Inspirations from land and sea, Mykonos to the Mainland (29.90)

Looking at the restaurant menu, there were quite a few interest entrees to choose from. I went with 'inspirations from land and sea', something like a share platter of various bite-size sea food and cured meats.

It was really well presented in a rustic wood tray and garnished with this beautiful light foam. It was the type of dish that impresses more the eyes than the mouth, although the smoked eel mousse was delicious - the stand out of element of this dish.

Feta souffle was really light and tasty. The mint was a good (and unexpected) addition to it. 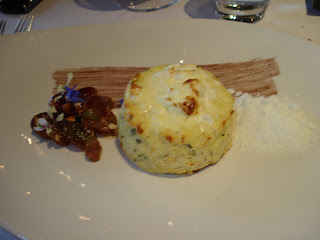 Last entree for the night was an interesting version of finely sliced calamari with cauliflower puree and croutons. It looked amazing and was well executed, but I felt it lacked a bit in flavour. 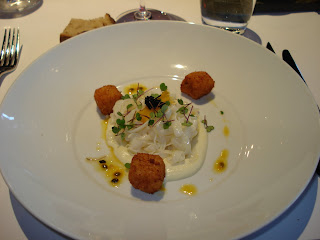 For mains, the first dish was a kind of greek stew of duck meat and quince served with bread marinated in feta curd. The bread was actually the highlight of this dish. The duck and quince were very well cooked, but again lacked a bit of flavour. 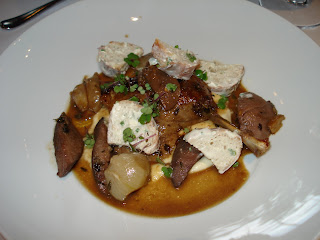 Kleftiko of duck and quince, village bread marinated in horiatiki 39.00

Steak marinated in yogurt was probably the best dish of the night. The whole thing worked really well with the toasted pine nuts and the yogurt was not overpowering. 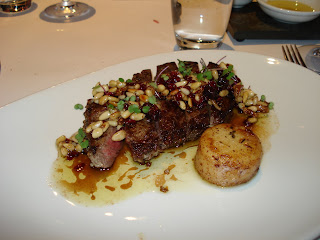 The staff was very accommodating to 'create' me a smaller main, as I wasn' t hungry enough to go for entree + main. I ended up having the traditional greek soup component of one of the entrees with a small serve of fish and side of roasted tomato and asparagus. The soup was amazing and the highlight of this dish. 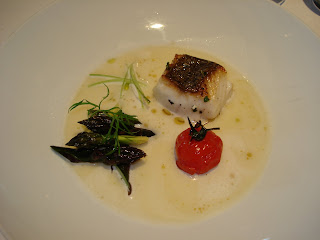 Soup of trahana perfumed with mastic oil, served with tomatoes and asparagus (21.90)

I have to say that overall I was expecting more of this restaurant. Yes, the service was great. Yes, the restaurant had a good atmosphere. Yes, the food was beautifully presented and well cooked. But it lacked something. I didn't walk out of the restaurant feeling like I had an amazing experience - as I believe you should feel walking out of a two hat restaurant where you pay $80 a head for a meal.

Overall, a bit disappointed - but would still go back again for a second try - I might have just been a bit unlucky tonight.